The continuation of patrols over the xerothermic grasslands covered by the LIFE+ programme, which were started last autumn

On Tuesday, August 16th, we continued patrols over the xerothermic grasslands covered by the LIFE+ programme, which had been started last autumn. We explored the area of Garb Pińczowski; from the Skowronno reserve to Serpentyna, that is, the Nida Wildlife Sanctuary. This time we could see the effects of the pasturage carried out for several weeks at the Serpentyna site.
The group consisted of seven people, and it was international, as apart from ZŚiNPK employees and the LIFE team, the following people participated in the patrol: Agnieszka, Paula and Barbara, geography, Polish and forestry students, as well as Nicolo from the University of Venice and Fabio from Portugal (both invited to Poland by the Foundation for Creative Space and Development CampoSfera from Klimontów).
We found some remains of a bonfire built on the outskirts of the habitat, but the team focused mainly on the location of the protected specimens of Carlina onopordifolia, which the trainees were made familiar with. An attraction for the whole group was to watch the flock pasturing at Serpentyna. The rock walls of the former quarry with the sheep and goats grazing at their base did create a unique scenery that cannot be found anywhere else at Ponidzie. 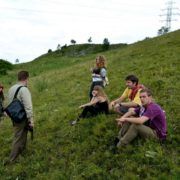 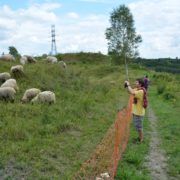 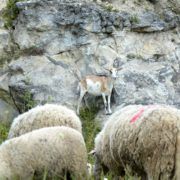 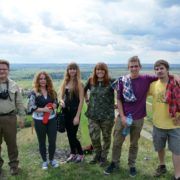 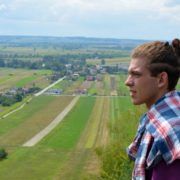 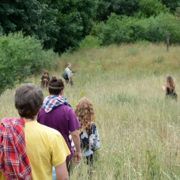