Project LIFE13 NAT/PL/000038 entitled „The Conservation of Valuable Habitats in Ponidzie”, implementation 1.06.2014 – 1.12.2018, is carried out by Województwo Świętokrzyskie Zespół Świętokrzyskich i Nadnidziańskich Parków Krajobrazowych in Kielce. The agreement with Nadleśnictwo in Pińczów was signed, on the basis of which the associated beneficiary has done the monitoring work in the main forest. According to the agreement with the associated beneficiary, all the maintenance as well as fencing of all the area will be completed on time. The offices have been prepared and equipped with the necessary hardware, a GPS receiver has been purchased as well as ArcPad and ArcGis software. The database which includes cartographic data prepared in GIS system as well as text information important for the conservation of the habitats have been created. 8 persons have been employed. The off-road vehicle has already been purchased and another one will have been purchased by the end of the 1st quarter of 2015. The projects of tourist infrastructure have been finished, the permits to collect seeds of endangered plant species, ex-situ breeding, tree and bush felling have already been obtained. The work connected with the felling the trees and bushes has started. Pasturage arrangements, the negotiations with farmers have already been finished. The basis for pasturage has been prepared i.e. farmers will share their grounds, which are part of environmentally valuable habitats, for sheep grazing. The location of the pasturage areas has gained the positive opinion of RDOŚ. Currently, the specification of the necessary equipment for carrying out pasturage is being prepared. The Steering Committee, being the advisory body for the coordinator of the project, was set up by the Head of the Unit. An invitation to trader to monitor the environment has been published. The formal documentation for preparing the drafts of signboards and educational boards has been prepared.
All other activities are being carried out in accordance with the approved schedule. 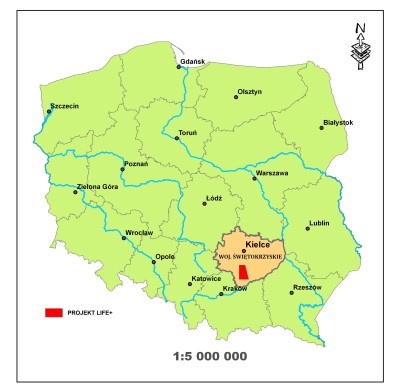 „The protection of valuable natural habitats in Ponidzie”

The total value of the project: € 1,161,649 (4,646,596 zł),
of which the European Commission has granted 50% of the grant,
the National Fund for Environmental Protection and Water Management in Warsaw – 45%,
and the remaining 5% of the value of the project are the beneficiary’s own funds.