A 20-person group from the Youth Education Centre in Podzamcze participated in a preventive patrol, which took place on 29 September in the habitat of xerothermic swards, which are the dominant plant communities on the south-west slope of Garb Pińczowski. This small part of Ostoja Nidziańska PLH260003 belonging to the Natura 2000 network is one of the most valuable natural environments in southern Poland.

The participants observed populations of Carlina onopordifolia Besser and learned the assumptions underlying the protection of valuable natural habitats based on extensive sheep grazing. A visit at an inactive quarry was an opportunity to learn about Pińczów limestones, which were used for centuries as a construction and sculpture material. It was in line with the privilege established in 1559 by the owner of Pińczów, Mikołaj Oleśnicki, which stipulated: “If someone desired to erect buildings of stone or build anything of stone for their own purposes, they shall be allowed, without any payment or without any levy, to quarry stones needed for those purposes on this land”.

Today, the quarry is inactive and there is little sign of the narrow-gauge railway which led to the top of Garb Pińczowski. The attractions, however, include an educational trail and a rich community of thermophilic plants. During the patrol, no signs of illegal rubble dumping within the habitat were observed. The patrol ended with an educational discussion in the office of the Complex of Świętokrzyskie and the Nida River Landscape Parks in Krzyżanowice. 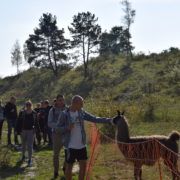 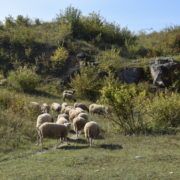 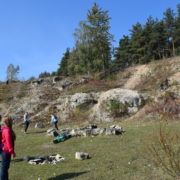