Have you bred sheep before?

We used to have some animals but a long time ago and it was not any large farm.

This summer you grazed 30 sheep and this is a true flock. Did you not have any problems with them?

The animals are like people. If you treat them right, they are also quiet. It turned out soon that the flock had one female leader. When she bleated, they all obeyed and when she went, they all followed. People came, watched and asked questions. The whole families came. It became clear that the flock of sheep was attractive not only for children but also adults.

This season there will be new sheep…

The young will come but they will also become attached to a human. One week after they came I could call them and they would come. I must admit I got attached to them. I seam to miss something. I am sad without them. The dog is also sad.

Did the dog get attached to the flock?

That is obvious. He would run after them and when they fell into a hole, the dog led them out. They were so calm. When we spread a line, they knew they could not cross it and would go one by one in a line.

Are you willing to continue sheep growing after LIFE project finishes?

That is obvious. And I am going to expand the flock. I own meadows so I will be able to graze them not only on the grassland. I will erect a sheepfold and they will have a place to stay in winter. A man learns. I learned to form hooves and I will learn everything.

But you were not eager to try shearing….

You may cut a sheep and the shearer said it was a nervous breed.

Was it worthwhile participating in the project?

It was the first season and I must admit we were apprehensive. What it all will be like and if nothing bad happens to the sheep, if they do not fall sick, if no dogs frighten the flock or attack it, but the season is over and everything was all right. My colleagues first laughed but today they are all interested in the project and sheep (Aleksandra adds). 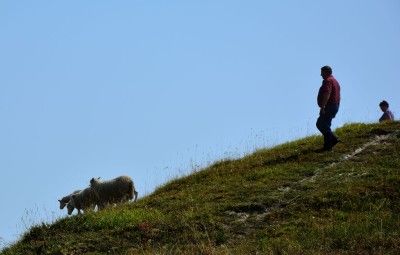