In one of the ponds in Górki near Wiślica we found a rare halophyte, called sea clubrush (Bulboschoenus maritimus). This is a collective species including smaller taxa, but they can be differentiated only after the seeds are seen (late summer or autumn). The sea clubrush is a facultative halophyte which means it can be found not only in salty areas. It rarely grows in reeds (often salty ones), especially at the sea side and e.g. along the Vistula river. Until now, we have known it solely from Owczary sanctuary. In the said habitat in Górki, it is found in a pond with water drained, over many dozen ares, creating a large homogeneous patch. Earlier, the underground bulbs of that plant, reaching the walnut size, were collected for food. Young, white or orange bulbs can be eaten raw like nuts while the older, blackish ones were used for making pancakes (they are too hard to chew). 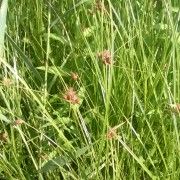 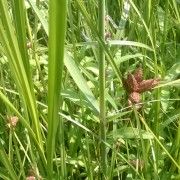 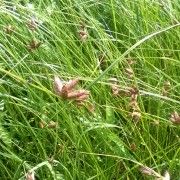