In the picturesque scenery of the medieval quarry situated on Garb Pińczowski, another preventive patrol was carried out. This time, a guest of the students of the Secondary School and the Post-middle School Complex No. 1 in Pińczów was a historian and well-known regionalist, dr Cezary Jastrzębski. He strongly emphasised the natural wealth of Ponidzie, its history, and the necessity to protect this amazing place located in the post-quarry area, which once served as a stone excavation site for great architectural undertakings of the Middle Ages and the Renaissance.

The quarry on Góra Okrąglica was already exploited as early as in the 12th century. The stone from the quarry – explained dr C. Jastrzębski – was used to erect the Cistercian monastery in Jędrzejowo, Saint Anna’s Chapel, and a range of buildings in the royal Cracow. The collection of litter scattered all over the entire post-quarry area was a wonderful educational idea. We hope that it will affect the behaviour of the young people in the future and it will make them guardians of this exceptional site.

Because both in the quarry and its vicinity active protection of endangered plants is carried out, the patrol has become an opportunity to learn about this form of activity of the Parks. Another exciting attraction for young people was observation of a herd of sheep grazing nearby… with a lama as a guide. At a bonfire, the students attentively listened as a police officer from the County Police Headquarters in Pińczów talked about the penal consequences for devastation and littering of protected areas and about how to light a bonfire safely and how to behave in a protected area.

The patrol was finished with time spent together at a bonfire. In the opinion of one of the teachers participating in the action, it turned out to be an amazing lesson about nature and citizenship. 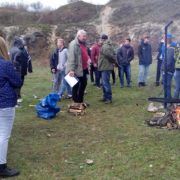 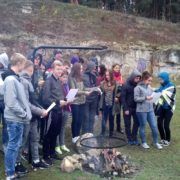