Every August, at the Main Market Square in Cracow, the International Folk Art Fair is held and “Dzień Pińczowa” (Pińczów Day) is planned for that time as well. This year, it took place on 17 August. It has been a long tradition. Another tradition at this grand celebration of folk art is the presence of the Complex of Świętokrzyskie and the Nida River Landscape Parks. We presented our tourist and educational offer and outlined the scope of measures undertaken to protect the xerothermic swards under the LIFE+ project financed by the European Union.
The stands of Country Housewives Clubs from Pińczów abounded with homemade baked goods, while the stage belonged to bands from Ponidzie. We set up our stand under the town hall tower right beside Igor Mitoraj’s “Eros Bendato” sculpture. It is a good spot because the Eros’ head at the Cracow market square is the most favourite spot for making souvenir, family photographs, so it indirectly contributed to the number of visitors at our stand.
Information leaflets, catalogues, maps, educational publications, and promotional gadgets of the LIFE+ projects attracted much attention. Most willing to stop at our stand were lifelong residents of Pińczów, but there were also people who have already been to Ponidzie or even people who have never visited our region and could hardly point it on a map of Poland. When told that it is only several dozen kilometres from Cracow, encouraged by our publications and delicacies from the neighbouring stands, they assured that they would visit us.
Children of course had great fun with the educational colouring books depicting protected plantsand animals, while adults could learn about the goals and assumptions of the LIFE project. Protection of xerothermic swards through sheep-grazing? It sounds incredible for many. Only after seeing our catalogue and hearing our explanations could sceptics be convinced that plants can also be protected by controlled, extensive grazing, which is beneficial both for the protected plants and theherders. 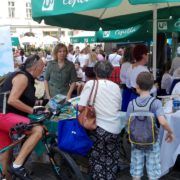 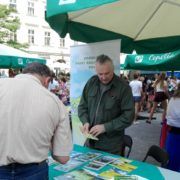 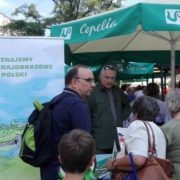 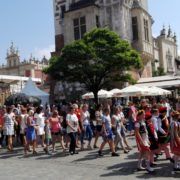 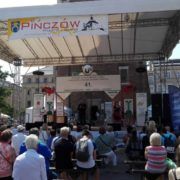 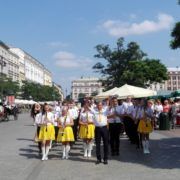