Nearly 400 people participated in an educational workshop we organized from the 18th to 26th of May. Young people from schools in Kielce and Busko Zdrój took part in field classes in Młodzawy and at Garb Pińczowski, and in classes conducted in small groups in the headquarters of the Landscape Park Complex of the Świętokrzyskie and Nadnidziańskie Regions in Krzyżanowice Średnie.

In the open air, young people could watch the pasturing in two different habitats: xerothermic grasslands and Quercetalia pubescenti-petraeae areas, and identify protected plants both in the natural environment and on our plantation established in Krzyżanowice near the headquarters.

The practical work began with a lecture on the history of Ponidzie; the history dating back to 14 million years ago when the Himalayas, the Alps and the Carpathians had been rising up, and limestone and gypsum had been forming deposits in the warm sea of the Precarpathian Depression. During the workshop the participants could also try their hands at needlework, making decorative woven bands on bardko and plates, or making pompons.

It was already the fourth edition of our workshop. And altogether, more than 1,300 people took part in it. 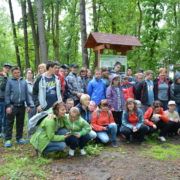 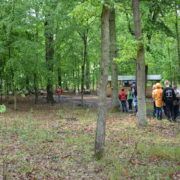